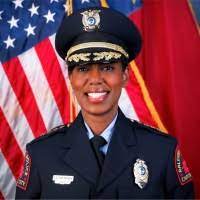 Join WBON of the Triangle

with the Raleigh Police Department

“The Power of Sustainable Community Partnerships”

Estella D. Patterson was appointed Chief of the Raleigh Police Department on August 1, 2021. As Raleigh’s senior law enforcement official, Chief Patterson leads the capital city’s police department of over 900 sworn and civilian employees. With a goal of making Raleigh the safest city in the nation, Chief Patterson’s priorities are to reduce violent crime, increase community engagement, and increase efficiency and morale throughout the Department.

Before joining the Raleigh Police Department, Chief Patterson served with the Charlotte-Mecklenburg Police Department from 1996-2021 in numerous capacities including patrol officer, instructor, recruitment director, Internal Affairs commander, and Patrol Services Deputy Chief. Aside from serving her community as a public safety professional, Chief Patterson served her country as a member of the U.S. Army Reserve from 1996-2005. Her service included combat tours to Kosovo in support of Operation Joint Guardian and to Iraq as part of Operation Enduring Freedom.

Chief Patterson currently serves as an executive board member and second vice-president of the N.C. Police Executives Association. She is also a Commissioner on the N.C. Criminal Justice Education and Training Standards Commission which regulates the training, certification, and policy making for all police officers in the state of North Carolina.  Additionally, she is a member of the Eastern NC chapter of the National Organization of Black Law Enforcement Executives (NOBLE).

Chief Patterson earned her Bachelor of Arts degree in political science from the University of North Carolina at Charlotte and her Master of Science in criminal justice from the University of Oklahoma. She is a graduate of the FBI National Academy and attended the 56th Session of the Senior Management Institute for Police. As a law enforcement professional and dedicated public servant, Chief Patterson’s passions lie in building collaborative partnerships in the community and engaging the youth through positive mentoring initiatives.